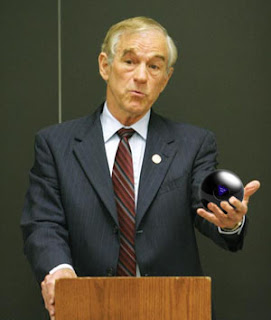 In the past I have taken some tentative steps to drive a wedge between actual libertarians and the so-called Republicans who only pay lip service to the idea of smaller government and less government intrusion into one's day-to-day life. But it looks like I won't have to do the heavy lifting for much longer, because the Republican Party itself is taking care of that for me.

You may know Ron Paul as a current Republican candidate for president, but Paul has some very strong sympathies with the Libertarian Party -- he was their candidate for president in 1988 and he formally addressed their national convention as recently as 2004; the Republican Party actually tried to defeat him as he embarked on his most recent stint in Congress in 1996, but after he defeated the "chosen" GOP candidate in the '98 primary, the national party agreed to a compromise whereby Paul would vote the GOP party line on procedural matters in exchange for the committee assignments his seniority would traditionally afford him. Paul votes "no" on any bill he feels gives Congress more power than the Constitution says it should have, from tax increases on down to ceremonial namings of things; he's such a believer in minimal government spending that he hasn't even signed up for the government pension all Congressmen are offered.

Naturally, as a lefty Democrat, when I first heard about Ron Paul years ago I thought he was crazy as a loon. But over the years, as I got more and more exposed to just how fatuous the GOP's claims of being "the party of small government" were -- and as right-wingers like Pat Robertson and James Dobson showed me what crazy really was -- his positions started to make a lot more sense. I still don't agree with him on much, but I can at least respect him for his honesty and integrity and for walking the walk when it comes to his stated positions -- something I have no inclination to do toward any of the other nine GOP presidential candidates.

All this, of course, means that the "mainstream" Republican Party has to spike Ron Paul tout suite. Ever since the galvanizing May 15 Republican debate, in which Rudy Giuliani falsely accused Paul of saying the United States "invited" the 9/11 attacks, Andrew Sullivan has been tallying up the legions of mainstream "conservatives" campaigning to excommunicate Paul from the GOP. Hugh Hewitt and Bill Bennett both want Paul bounced from future GOP debates, as does the chair of the Michigan GOP; Hewitt's co-blogger, Dean Barnett, dismisses Paul as "cuckoo for Cocoa Puffs"; one of Paul's own former senior aides, current RedState blogger Eric Dondero, is threatening to challenge Paul for his House seat next year. Over at National Review, Larry Kudlow obediently chimed in with a judgment of Paul as a member of the "I hate America" camp. And all because Paul suggested that unchecked interventionism in the Middle East was a foreign policy that encouraged greater animosity toward the United States.

Kind of tells you where the "mainstream" Republican Party is at these days, doesn't it? You have to be in favor of continued intervention in the Middle East, an indefinite military commitment in Iraq, and oh yeah, torture of detainees to pass muster as an official GOP candidate these days. If you don't, it doesn't matter how many taxes you want to cut or government programs you want to scale back, you're still a heretic.

I'll tell you this: Obviously I still disagree with Ron Paul on some very fundamental things, but of the current Republican presidential stable, he's the only one I'd even consider voting for in the next million years. Clearly Paul isn't going to win the Republican nomination, but I would love it if the mainstream GOP's barely disguised contempt got him just angry enough that he decided to run as the Libertarian nominee anyway. Again, I'm at odds with libertarians on a number of things, but they at least present some ideological contrast to the Democrats -- which, despite being a Democrat, I think is a good, healthy, and necessary thing. As far as I can tell, the current Republican Party's only divergence from the Democrats is their desire to relegate gay people to second-class citizens and invade any foreign country that looks at them sideways. In short, they're a party that is outliving its usefulness. Ron Paul may not be telling people what they want to hear, but at least he's telling the truth -- and I don't care who you are, that's more than Rudy Giuliani or Mitt Romney is bothering to do.

ADDED: It's getting worse. Using a line of "logic" that remains a complete mystery to me, Fox News's John Gibson and Michelle Malkin go so far as to lump Ron Paul in with the "Bush knew about 9/11 before it happened" crowd. Not at all surprising from a guy who says that the left wing is actually "cheering terrorist victories" and a woman who tried to push the falsehood that John Kerry shot himself to get out of Vietnam, but still, yikes -- the GOP really is out to get this guy.

Paul's supporters fire back at Saint Rudy and the purge-Paul crowd here.
Posted by Astronaut Mike Dexter at 8:21 AM

"As far as I can tell, the current Republican Party's only divergence from the Democrats is their desire to relegate gay people to second-class citizens and invade any foreign country that looks at them sideways."

Very true. I'd add to that:

Dems desire to place an inordinately greater tax burden on folks who are successful, and fund their party's version of social engineering.

Republicans desire to use the power of the state to legitimize mythology and fairy tales, creating a theocracy.

Completely agreed. My vote will go to Paul as long as he is on the ballot.

And good points Shan, as well.

Once the Republican party ceases to offer viable opposition to the Democrats, leaving America with a one-party system and thus finally exposing our version of democracy for the oligarchy it's generally been for the past century, then it will have outlived its usefulness. Because, if you take a temporarily agnostic view of ideology and just look at things in terms of preserving our democracy, providing viable opposition is any party's fundamental utility.

That said, the trends of big (and expanding) government, corporate welfare, global imperialism, one-size-fits-all immigraton policies and general cronyism will ultimately separate this party from its ideological bedrock and thus erode its viability as an opposition party. That is, provided that the Democrats can get out of their own way to press their advantage, something they've shown no ability to do.

Something tells me we've crested the hill, and are already a good way down the other side...

Firstly, it was 1996 when we first won the GOP primary and not 1998 as you say above. I was serving as Ron's Campaign Coordinator at the time.

There's a lot that's not know about those first few races. Like the fact that Gov. George W. Bush and Karl Rove pulled out all the stops to help Ron get elected in the General. We would simply not have won, if it were not for their support.

Now Ron Paul stabs his former friends in the back with a long knife. The classic "not dancing with those who brought you to the dance." Says a lot about his character, or lack thereof.

Go ahead, try to drive a wedge between libertarians and the GOP. Over my dead body. It's the Leftists who hate America, and defacto support Islamo-Fascism (the polar opposite of libertarianism), who are the enemy.

Yeah, Republicans can be a little prudish sometimes and even a bit goofy, (especially when we libertarians get a few beers in them at late night YR parties), but overall they are much more nicer folks, and much more honest than the Leftist slime.

Thanks, but no thanks. We libertarians will stick with the GOP.

And please do continue in your efforts. It will keep you working on a project with no chance of any success, rather than something else that might prove more productive.

Eric, I'd be inclined to take your analysis more seriously if there was any chance that you were within spitting distance of reality. However, your assessment of who is "dishonest" leads me to conclude that you are either exempting the current administration from your assessment of who's doing what in American politics, or that you do not actually understand what the phrase "the rule of law" means. Equally, I'd argue that liberals are quite clear about the dangers of "Islamo-fascists," since we have plenty of local theocratic authoritarians to contend with... the upside being that ours stick to (stuffing) the ballot box, a time-honored local tradition in American politics. And believe me, I'm pleased about that, it's better than the alternative.

If Ron Paul refuses to "dance with the ones who brought him", that's the fault of Bush and Rove, not Paul.

But you are correct that it says a lot about Paul's character: he's maintained a strong pro-Constitution policy attitude ever since he first took office, something that can't be said for Bush, Rove, and an ever-growing handful of Republicans, who have overstepped their delegated Constitutional authority.

And after a little research, it's starting to become clear that you have some serious issues, man.

You failed to mention why you're not longer working with Mr. Paul on his current campaign: it's because he fired you.

eric dondero IS TO BE IGNORED. LIBERTARIANS IGNORE HIM. WE ASK THAT YOU DO THE SAME.

Urkobold hath spit forth the TRUTH.

Eric Dondero's "small government when it benefits me" oxymoronish form of mainstream libertarianism requires the equivalent of an intellectual feather to topple. He doesn't appear to appreciate or understand the philosophical underpinnings that anchor the line which Ron Paul treads. Dondero talks the neocon talk about national defense, but be sure you could flummox him if you asked where the monetary credit comes from to pay these expansionist bills.

I urge everyone to explore some of the economic policy that Paul is espousing. That includes you Dondero, maybe you'll learn something.

ps. the emergence of this Dondero character, who ostensibly still has connections within the Paul campaign is a sure disproof of any coordinated hanky panky in online polling. If there was, he'd be trumpeting it far and wide.