The gift that keeps on giving. 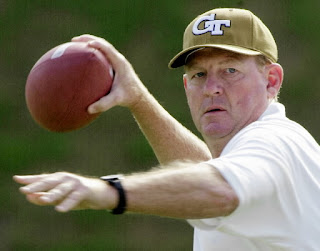 Chan Gailey may have been a head-scratcher of a choice to be the Buffalo Bills' next head coach -- at least to those of us in the state of Georgia -- but it's been a good thing for the Dawgs so far:

First he hired Giff Smith, the recruiting coordinator who’d constructed the 2007 recruiting class that propelled Georgia Tech, as coached by Gailey’s successor, to the 2009 ACC title. (Since you asked, Tech is still paying off Gailey’s contract.) Now he has hired George Edwards, whose term as Florida’s defensive coordinator lasted only slightly longer than Urban Meyer’s stint as Florida’s former coach. (And Gailey, as we know, is a Gator alum.)

Over the six seasons Gailey tried and failed to beat Georgia as Tech’s head man, it was occasionally suggested he might actually have helped the Bulldogs more than he did his team. (Half those losses defied belief.) And now, given this latest flurry, it seems prudent to ask:

Is it possible Chan Gailey has been a stealth Georgia fan all along?

I don't know the answer to that question, but you know what? I'll take it.
Posted by Astronaut Mike Dexter at 9:21 AM

Email ThisBlogThis!Share to TwitterShare to FacebookShare to Pinterest
Labels: football, you can't return this jacket for spite

Hi, I don't usually comment on stories I read, but I just had to tell you how much I love this story! NFL Shop. So, the fact that I finally found one and it's really really good is amazing! Thanks again for sharing and keep up the good work, I can't wait for more!