It's all over now, bébé bleu. 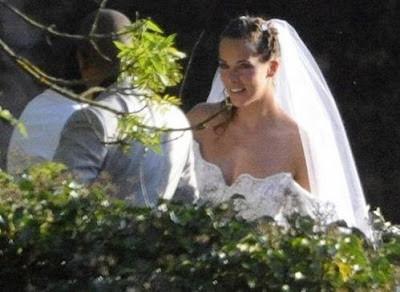 Yup, that's Melissa Theuriau in that picture, and she done got herself hitched. And she didn't even tell me beforehand. (Thanks to Mack Williams and LD, by the way, for breaking the news to a brother gently.) Anyway, the point is, FAIL. There's going to be a period of mourning here at Hey Jenny Slater, I'm not gonna lie to you.

OK, some drug use is acceptable.
Posted by Astronaut Mike Dexter at 1:36 PM

Email ThisBlogThis!Share to TwitterShare to FacebookShare to Pinterest
Labels: hot chicks, melissa theuriau, teh suxxorz, times I wish I was dead

And she looks just as beautiful as you would imagine her to look on her wedding day. Condolences, Doug.

Sorry, dude. Honestly, nobody as beautiful as Melissa comes to mind.

Actually, I take that back. While in Italy two weeks ago, I met the most beautiful woman I've ever laid eyes on. Her name is Elena and she wears beige Chuck Taylor Allstars. She said "Buongiorno" and shook my hand. I said "Buongiorno" back. She left just minutes later. Sadly, I have no photographic evidence of her stunning beauty. I was concerned that I was gawking too openly for the two minutes she was around. I glanced briefly at my female friend sitting across from me to discover her even more agog, staring with an open mouth. I'll miss Elena forever, but she did make me believe that God exists, so I guess that's something.

Any news on who she married? No doubt some insanely good looking and weathly soccer star.

A while back I offered to introduce you to my law school study partner friend that was formerly an Ole Miss Dancing Rebelette, but alas tonight she is in the finals to be a Tennessee Titans Cheerleader so that will be higher on her resume now. On the upside she says she will give me tickets to the Indy game. Keep her in your prayers and if that develops I will let you know. Mind you she is like a sister to me, except one doesn't normally have lewd thoughts about a sister. But we are in Tennessee so it might be ok.

Also Melissa is just trying to make you jealous, don't fall for it.

Update, she made the team, but you wouldn't be interested in a pro cheerleader/liberal activist lawyer anyway.

My condolences Doug. I remember my sister's 14 year old heart being completely destroyed when Nick Rhodes of Duran Duran got married back in the '80s. I didn't quite get it then because I've always been one to punch my weight. (not that that's been so lucky, but that's just me)

You're going to hate this suggestion, but why don't you take a break from the fantasy unattainable women that no woman in your real life could possibly live up to?

I suggest giving Zen Bubba a call. Unless of course you'd like to wait and see if your crushes on "Liz" and Hayden Panettiere evolve into something more serious.

I suggest drinking. After enough of it you might be convinced every girl looks like Melissa. Too bad dude.

Glad to see you're taking it so well.

Personally...I'd look up what the average rate of divorce is in France.

Famous people over here don't stay hitched for long, maybe it's true there too.

Also, don't count out the Republican women...some do have working brains and can be turned. It's a lot like an excorism, and there is a bed involved...