The Friday Random Ten+5 stands up for wagon rights.

If you've been reading this blog for a long time you're probably aware of my borderline-unnatural obsession with station wagons, Volvos in particular. So imagine my dismay today when I discovered that this sweet piece of ass . . . 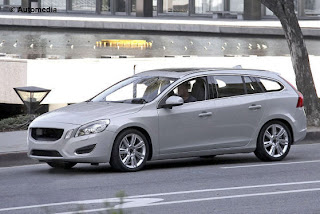 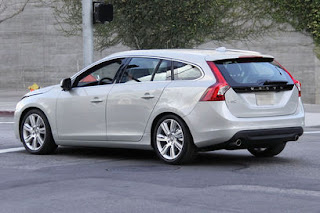 . . . probably won't be coming to the United States. That's right: Volvo, the company that helped turn station wagons into status objects, that put the 265-horsepower V70R on the road, that once used the advertising tagline "Until Ferrari builds a station wagon," is denying us the V60 wagon you see above. That's kind of like McDonald's announcing that it's only selling Big Macs in Europe and Asia from now on. Sure, you could just go get a Quarter Pounder or even an Angus Deluxe, but what if what you really want is a fricking Big Mac? And why would McDonald's just arbitrarily deprive us of the main product they built their name on to begin with?

Of course, a lot of the blame rests with people who insist on buying SUVs instead of wagons, which are just as practical but sleeker, more agile, and way more efficient. At any rate, in a world where even Volvo can no longer be counted on to stand up for station wagons, I figured I'd use this week's +5 to pay tribute to the wagon's unsung badassedness -- so join me, won't you, as I sing the praises of the Five Most Awesome Non-Volvo Station Wagons Ever: 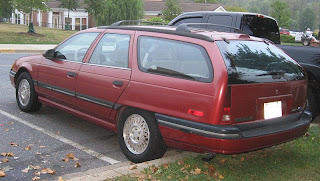 Ford Taurus
Hell of a way to kick this off, I know. But hear me out: When the Taurus first came out in 1985, at a time when pretty much every other car was rocking sharp angles and square sealed-beam headlights, this thing was hot shit. Or at least I thought so as an impressionable third-grader, and when my mom finally replaced her old Chevy Malibu with a Taurus LX wagon in 1987, I was in heaven. Not only did the thing look badass, but for the first time our family had a car with a rear-facing third seat in it, which my sister and I had coveted for years. Of course, it didn't take that long before we discovered that my cousin Duff and I were the only ones who could sit back there for any length of time without getting carsick, but hey, good for us. Incidentally, I remember taking a family trip up to Washington, D.C., when I was in junior high, and Duff was the one sitting back there with me while we were stopped at a traffic light somewhere in Alexandria and a dude in an Escort rear-ended us. Yup, we got to watch the whole way as the guy -- who was dealing with one of his kids in the passenger seat -- sped toward us, looked up, mouthed the words "Oh shit," tried to hit the brakes, and plowed into us at 30 or 35 miles an hour. The Taurus? Ended up with barely a scratch on the back bumper. So don't tell me that thing wasn't gangsta. Sometimes I still get wistful about it. Room for five passengers and two or three kegs . . . yeah, that would've been an awesome car to take up to college. 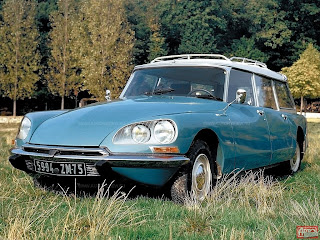 Citroën DS Break
Before anyone makes any French-car jokes, "Break" isn't meant to be a consumer warning, it's just the French shorthand for "station wagon." (In the UK it was called "Safari" or "Familiale"; in the U.S. it was just called the "Wagon." Man, we had no imagination whatsoever back then.) By any name, the DS was decades ahead of its time when it first hit the roads in the mid-fifties: It was one of the first cars ever to have disc brakes, power steering, and a semi-automatic transmission; the wagon added a cavernous cargo area and a rear-facing third seat (w00t). The DS as a whole developed a devoted cult following, but the wagon has been converted into everything from ambulances to Ghostbustermobiles to off-roaders to, well, whatever the hell this is. There are still a few of them plying the roads in various far-flung corners of the U.S., and I'd like to think I'll be able to get my hands on one of them someday. 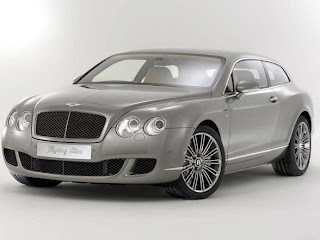 Bentley Continental Flying Star
OK, this one's a bit of a fudge, because it's not technically a station wagon, it's a "shooting-brake" -- a specialized niche of car developed by (mostly British) rich guys who wanted to have something as fast and stylish as a grand touring car but also wanted to be able to carry their rifles and hunting dogs around their property. The Flying Star, converted from the standard-issue Bentley Continental by Italian coachbuilding house Carrozzeria Touring Superleggera, has everything that makes the Continental awesome (twin-turbo W12 engine, 0-60 in less than five seconds, top speed butting right up against the 200-mph mark) but adds a cargo area big enough for me to go by and borrow my parents' lawnmower when I've got yard work to do. Hey, awesome! And it only costs 590,000 Euros, which at the present exchange rate I think converts to approximately half a bajillion dollars. Give or take. 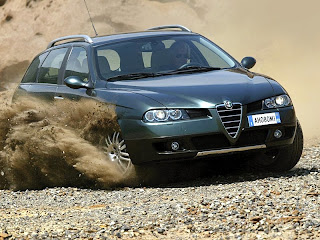 Alfa Romeo 156 Crosswagon
The Crosswagon was sort of the Italian version of the Subaru Outback -- take a mainstream station wagon, jack up the suspension a couple inches, add bigger tires, and throw on some body cladding to make it appeal to people who might otherwise get snowed into buying an SUV. As the picture above indicates, it could actually hold its own off-road -- as much as anyone in Italy would ever need it to, anyway -- but had a high-pressure turbodiesel engine that got gas mileage in the mid-30s. Presumably this would have been the preferred car of left-leaning Italian soccer moms, which is a demographic I can live with. (Actually, they'd be called "mamme di calcio" over there. See, this blog teaches you stuff.) 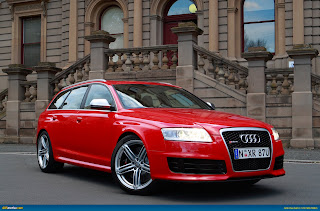 Audi RS6 Avant
I'm assuming you gearheads out there are familiar with the Audi R8, yes? OK, ponder this: Audi took the 5.2-liter V10 out of that car, dialed the horsepower up a few notches, and dropped it into a station wagon, which you can purchase and drive up to 174 miles per hour -- assuming you live in Germany, have $160,000, and are comfortable with the prospect of your face being peeled off by g-forces, Colonel Stapp-style. Quite simply, it is not only the most bad-ass station wagon ever produced but one of the most bad-ass cars on the planet, period. The only thing it doesn't have is the all-important rear-facing third seat, which is kind of a shame, because I think it'd be fun to put your kids back there and let them wave as you smoke Porsche 911s and Shelby Mustangs away from stoplights.

By the way, I'm launching a Twitter campaign (aimed at @VolvoCars_US) to demand that Volvo treat the V60 wagon as an equal: Be sure to use the hashtags #shameonyouvolvo and #freetheV60, along with whatever else you can come up with. With your help, I can force Volvo to bend to my whim and bring the V60 stateside, or at least send me some free shit.

Your turn -- your favorite wagons and/or wagon-related memories (even those not involving accidents), along with your own Random Tens, in the comments, por favor.
Posted by Astronaut Mike Dexter at 7:28 AM

Oh man, I can't even think about sitting in the rear-facing seat without getting queasy. Such a shame, because you could get away with so much more crap back there.

Great to have you posting again, Doug.

I have absolutely no idea who made the station wagon my grandmother drove for 30 years but let me tell you it was a machine! dingy olive green with wood paneling. They just don't make cars like they used to.

"a lot of the blame rests with people who insist on buying SUVs instead of wagons, which are just as practical but sleeker, more agile, and way more efficient."

I came to that same realization a while back. I had gotten into mountain biking so I obviously needed an SUV to fit my bike in. Luckily I looked at a Toyota Matrix and realized it had about as much cargo room as a Highlander, but got much better mileage and was a lot cheaper too. I love my Matrix and just have to shake my head at my friends who insist they need the extra room an SUV provides. I've got two kids and a dog, and all (including my wife) fit in the Matrix just fine.

Station wagon rear facing third seat memories...where to begin? Obviously there was the standard 4th grade field trip antics of writing "Eat my shit" on notebook paper and holding it up to the cars following us but favorite memory had to be my 12th birthday party and riding home from a long night at Six Flags. We all had those crazy glow in the dark necklaces around our necks and one of my friends had been chewing on his and noticed he had managed to make a hole in it allowing the neon green liquid to drip out. He had the awesome idea to then twirl that necklace around in the air covering the rear of my mom's Chevy Caprice wagon with glowing green specks. We thought it was the coolest thing we had ever seen. We had created our own planetarium in the back of my mom's wagon.

I got a rental Volvo wagon for a couple of days while getting some work done on my SUV. Seemed like a week. I give a wiiiiddde berth to Volvo drivers I see on the road. As a group, they are horrible drivers. I think they must choose Volvo for the safety factor; i.e., they know they are horrible drivers and are bound to be in a collision of some kind and want the safest car they can get. Nothing else makes sense: they aren't cheap initially, they aren't fast, they aren't comfortable, they aren't economical to drive, and they aren't easy to maintain. Your taste in cars (Citroen, VW, Volvo) is an enigma - you seem like such a normal person besides otherwise.

But, I am still glad you are back.

I love that I WOULDN'T NORMALLY DO THIS KIND OF THING showed up today on a post. I should read you more on the regular.

Your fixation with wagons probably has a genetic link. Your grandparents probably has the most unusual succession of wagons known to man - a Studebaker wagon, then an Edsel wagon and then a Saab 93 wagon (the 2 cycle, 3 cylinder, seven passenger vehicle with a freewheeling transmission).

That read like a beautiful episode of "Top Gear".

Hey! Jenny Slater is back! You've been missed. Decided to check back, since football is almost starting to warm up. Glad you got a jobby job.

I have a silver 2001 Volvo V70 T5. It has 247 Hp, loads of space, nice sports trim comfortable black interior with dual power and heated seats. Not only is it fast but it was cheap. I bought it used for about $4000US after taxes and licensing. Parts and labor are not cheap, but there are many things that you can do yourself and parts that you can buy much cheaper used if you go online and look at things like volvospeed, turbobricks, volvoforums, and IPDUSA.