Almost no sooner had I finished ranting about what a crock of poo Time's "100 Most Influential People" list was -- for, among other reasons, the fact Ann Coulter was on it as anything other than a delayed April Fool's joke -- than my uncle e-mailed me to report that Time was kicking me in the balls once again with the very next freaking issue by putting Her Coulterness on the cover. I was going to put another rant up about that atrocity immediately, but then I thought, no, that's what a conservative would do -- go off half-cocked without actually having read the freakin' article. So I folded my hands and waited like a good little media consumer for the offending issue to arrive in my mailbox.

Turns out I didn't need to wait after all. John Cloud's story on Coulter is a blowjob piece, pure and simple, and not just because Coulter has the right equipment for it. Cloud wastes nine pages of ink to basically do precisely what I was so pissed off at Time for doing in Coulter's "100 Most Influential" profile -- shrugging his shoulders and saying, "Well, love her or hate her, you gotta admit she's interesting!" No I fucking don't. Coulter wasn't even a terribly compelling writer before 9/11, and ever since the WTC attack and the subsequent War on Terra pushed her Crazy Button, her writing has basically descended into a borderline libelous right-wing version of Mad Libs: Liberals are all [anti-American adjective] [noun with positive connotation]-haters who want to help al-Qaeda destroy America's [noun] and kill [proper name of brain-dead Florida woman]. Fill in the blanks, send to editor, publish, rinse, repeat. As Harvey Keitel said in "Pulp Fiction," "Just because you are a character does not mean you have character," and I don't appreciate John Cloud insulting my intelligence by implying that someone who advocates the wanton murder of innocent Americans is someone I should want to hang out and go to parties with just because being a total asshole is so charming, not to mention courageous.

Anyway, y'all are probably well aware that I could go on forever about this -- and I have -- so I'm going to rest my anti-Coulter case there and instead start in on Time itself for publishing this rubbish. Better bloggers than I have already given Time its due ass-whupping for totally going easy on Coulter and for getting hook-line-and-sinkered by some right-wing activists in one of the pictures they chose to publish, so I'll leave those alone. Instead, I'll merely say this, not just as a pissed-off liberal but as a pissed-off subscriber: Congratulations, Time, you pansies, you dumbasses. You did what all these other mainstream media outlets have done -- you got intimidated by all the right-wing claptrap about the "liberal media," so you thought that if you just bent over and did a nine-page puff job on one of their heroines, they'd give you a treat, scratch you behind the ears and call you "Good boy" instead of "America-hating commie." Well, guess what? It didn't work. Despite the fact that your writer did everything short of wash Ann Coulter's car and clean her apartment for her, she's still complaining -- because your cover photo made her feet look big! 'Elp, 'elp, she's being repressed! (If I were Ann, I'd just be glad you can barely see my Adam's apple in the photo and I'd shut up about it, but you know right-wingers never let stuff like gratitude or propriety get in the way of a good whine.) And those right-wing "liberal media" accusers you spent nine pages trying to placate? Yeah, you whiffed with them too. The knobs at Free Republic -- who are probably still jerking off to Coulter's cover photo, big feet and all, as we speak -- are only laughing at you for falling for that bogus protest photo. Whoopsie!

In the campaign-communication seminar I attended during my whirlwind weekend in Little Rock, we were told that it didn't matter whether John Kerry, John Edwards, or John Holmes got the Democratic nomination, Karl Rove and the Republicans were going to make sure he got nailed as a flip-flopper; they'd determined that one of Dubya's strengths was his steadfastness and resoluteness, so they had to peg his opponent, whoever he turned out to be, as the opposite. Well, Time, you've just found out that their strategy toward the media is the same way: They're going to peg you as liberal and biased no matter what you do, because without a so-called "liberal media" they've got one less thing to blame their mistakes on. And you just fell for the same false promise that's been getting high-school girls knocked up since the beginning of time. You were at the prom, talking to this really cute right-wing boy who said if you just do this one thing for him, he'd love you forever and never leave you, so you got into the back seat of his car with him and hammered out nine pages on how awesome Ann Coulter is -- and bam! The very next day at school he's laughing with his friends about how easy you are, and oh yeah, he's still calling you "liberal." It doesn't matter what you do, guys, you can name Ann Coulter "Man of the Year," you can write a staff editorial pushing Dubya for Pontiff, and it won't matter. You'll always be the same old "liberal media" to them.

Sadly, after all this, I'm still not convinced Time has learned its lesson, but I sure have. And they may consider my subscription cancelled.

Anyway. Sorry to have kicked off your day with such bile -- well, not really -- but here's some funny courtesy of the indescribably awesome Mark Twang: 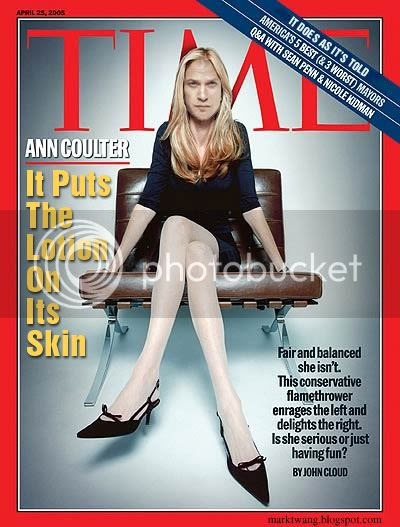 Added: More whining from Coulter about how everything is actually the liberals' fault, even when it's really hers.
Posted by Astronaut Mike Dexter at 12:49 PM

Ok, no Coulter fan am I, but how can you say you don't find her interesting? How much freaking print (or whatever you call it in the Internet age) have you spent on ol' Coultinator? As you have translated her obsessive hatred of Clinton of wanting to go down on him, you could be accused of much the same. At the very least, she interests you. Hell, a Google search for "ann-coulter doug-gillett" comes up with 22 matches.

A valid question, but you'll notice that I stopped doing the weekly Coulter-fisking months ago because . . . well, quite frankly, I'd gotten bored with her. And the fact that Time would blow nine pages on an already shark-jumped hack writer just makes their decision look dumber in retrospect.

Kinda like Ward Churchill. Why didn't anyone jump on his ass when he wrote what he wrote, four years ago? Why the sudden relevance?